Home
anime
Will Konan Die In Naruto? The Only Female Akatsuki Member


Masashi Kishimoto’s Naruto series has a wide range of villains who have garnered their own fan following over the years and not without cause. Naruto is one of the most-watched anime out there for being the story about an orphan boy who grew up with nothing but was able to change his destiny with his willpower and perseverance. However, fans also love the series because of its villains, who all have well fleshed-out backstories.

The Akatsuki clan has always been a fan favorite because of all of their abilities, intriguing backstories, and cool character designs. They were an organization of the most infamous criminals and powerful shinobis who had banded together to bring about a new era of peace but through any means possible.

Konan, Yahiko and Nagato founded the Akatsuki clan with Yahiko as their leader. Yahiko’s views of a new and better world without wars between various shinobis had influenced both Konan and Nagato very deeply since all three had lost their families because of war.

As the only female member of Akatsuki, Konan was a very important member of the group. She was always the supporter of both Yahiko and Pain from their childhood days, as the three founding members of Akatsuki and till their death.

So, Who is Konan?

Konan was a kunoichi from Amegakure and a founding member of the original Akatsuki. We get to see Konan for the first time in episode 125 of the anime. Konan’s parents were killed during the Second Shinobi War, and hence, she was an orphan fending for herself. She is the one who finds Nagato lying on the ground with his dog, on the verge of death. She takes him back to their hideout, where with the help of Yahiko, she takes care of him.

The three bond together very closely and share similar ideas about the war. They train together under Jiraiya. When they graduate, they form the infamous group Akatsuki and make Yahiko their leader. Yahiko was the most passionate about changing the Shinobi world and bringing forth an era of peace. 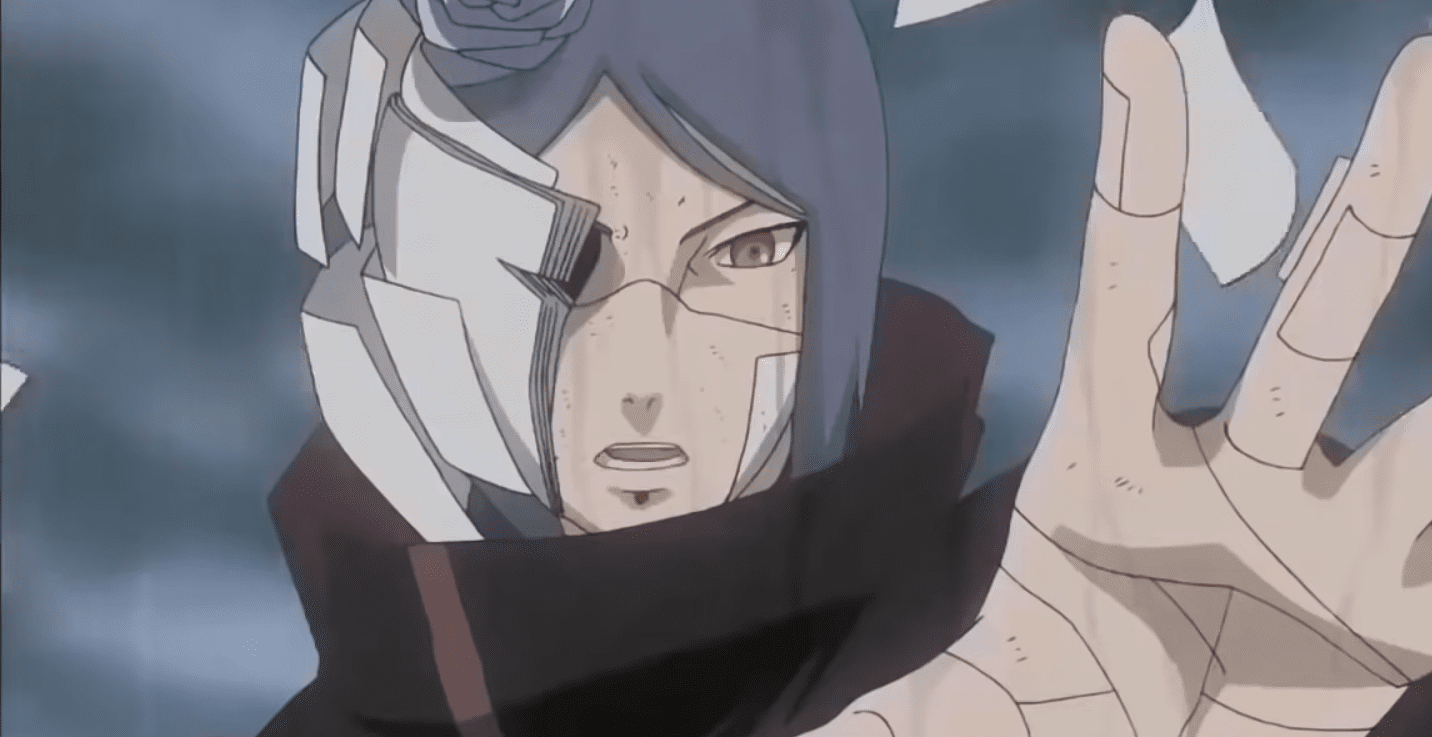 Konan was a very talented Kunoichi and an S-rank criminal. She was personally trained by Jiraiya and was praised by him as well. Konan’s powers were heavily appreciated by her two partners Yahiko and Nagato. Konan’s nature transformations included Wind, Water, Earth, and Yang Release. She is also a sensory-type ninja.

Konan loved to make paper art as a child. Later, she developed this into her fighting style, Dance of the Shikigami. With her technique, she could transform her entire body and clothes into paper. She could make paper clones of herself and even hide explosive tags in them to ambush the enemy. She could create paper wings and fly with their help; also launch paper projectile weapons from those wings.

Her paper was unaffected by water or even Jiraiya’s Fire Release: Flame Bullet technique. She could even overpower Jiraiya’s technique with her paper ninjutsu. Konan could create fake environmental surroundings with her paper.

Konan is shown to have a very calm, level-headed, and stoic demeanor in the anime. She is similar to Nagato in this regard. As a child, she is shown to be quite cheerful compared to the other two and has a natural affinity towards origami. Unfortunately, the traumatic events in her life changed her overall demeanor. She did not speak much during any Akatsuki meetings, but she is more compassionate than the other members. She always prioritized the safety of her members.

Konan acted as a supporting character in the group, working under Nagato and Yahiko. After Yahiko’s death, she chose to follow and serve Pain (Nagato), who had become the leader of Akatsuki now. Konan was the only one who still called Pain by his real name. She did his bidding without any questions and supported him throughout. She also acted as the intermediary between Pain and the villagers of Amegakure. The villagers would call her God’s angel as she had paper wings on her back. She could read Pain’s emotions as a result of knowing him since childhood.

After Nagato’s death, Konan defected from Akatsuki and became the de facto village head of Amegakure.

How did Konan Die?

During the fourth Shinobi World War, Tobi infiltrates Amegakure. He ends up face-to-face with Konan and asks her the location of Nagato’s corpse so that he can take his Rinnegan. She tells him that she intends to kill him. When Tobi asks why she and Pain betrayed the Akatsuki, Konan replies that she had seen the embodiment of light and hope within Naruto, and so had Nagato. That is why Nagato revived the people he killed in Konoha, the process of which depleted his life force completely.

She says that she believes Naruto can accomplish the aim of a peaceful and better world. Konan attacks Tobi with her paper shuriken Jutsu, but they pass right through his intangible body. She envelops him in her paper form mixed with her explosive tags, ready to sacrifice herself to kill him. However, Tobi saves them both by warping most of the explosion away. A part of his mask breaks off.

Konan uses her paper to replicate the lake of Amegakure. Tobi lands on it, thinking it is the real lake, then falls into the abyss of paper. She detonates the six hundred billion explosive tags she had hidden there over a period of ten minutes as Tobi cannot stay intangible for long. She believes she has killed him off and collapses as her chakra has depleted itself by now.

Astonishingly, Tobi appears behind Konan and stabs her in the back with a metal pipe. He survived her attack by activating Izanagi at the cost of his left eye. She freed herself, and the rains oner Ame stopped for the first time. Konan took this as a sign of Nagato’s will and hope for a better world. She became more determined than ever to stop the darkness which she believed Tobi to be. Unfortunately, Tobi grabbed her by the throat and put a Genjutsu on her so that she would reveal Nagato’s location. His attack was such that she would die when the illusion ended. Her blood-soaked body falls into the water.

One of the pieces of paper from her clothes, soaked in her blood, gets blown to the Ame Orphan’s old hideout and comes to rest on top of her ‘Hop-in’ card. This fulfilled the promise, Konan had made with Nagato and Yahiko that they would return to this place once everything settles.