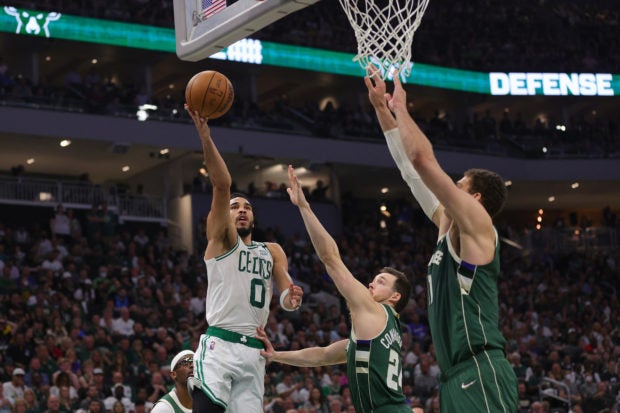 Jayson Tatum of the Boston Celtics shoots the ball against Pat Connaughton and Brook Lopez of the Milwaukee Bucks during the second quarter in Game Six of the 2022 NBA Playoffs Eastern Conference Semifinals at Fiserv Forum on May 13, 2022 in Milwaukee, Wisconsin.  (Getty Images via AFP)

With his team facing elimination, Tatum delivered, drilling seven of the Celtics’ 17 three-pointers and helping them withstand a 44-point, 20-rebound performance from Bucks star Giannis Antetokounmpo and knot the best-of-seven series at three games each.

Antetokoumpo posted the first 40-point, 20-rebound game since Shaquille O’Neal in 2001, but his third 40-point outburst in four games wasn’t enough for the reigning champs to advance.

They’ll have to battle for a place in the Eastern Conference finals in Boston on Sunday — the same day that the team Milwaukee beat in last season’s championship series, the Phoenix Suns, play the Dallas Mavericks in game seven of their Western Conference series.

Tatum reeled off 11 straight Boston points in the fourth quarter to help thwart a rally by the Bucks, who closed a 13-point deficit to four on Antetokounmpo’s three-pointer early in the final period.

It looked briefly as if the Bucks might author another impressive comeback victory, after erasing a 14-point fourth-quarter deficit to win game five on Wednesday. 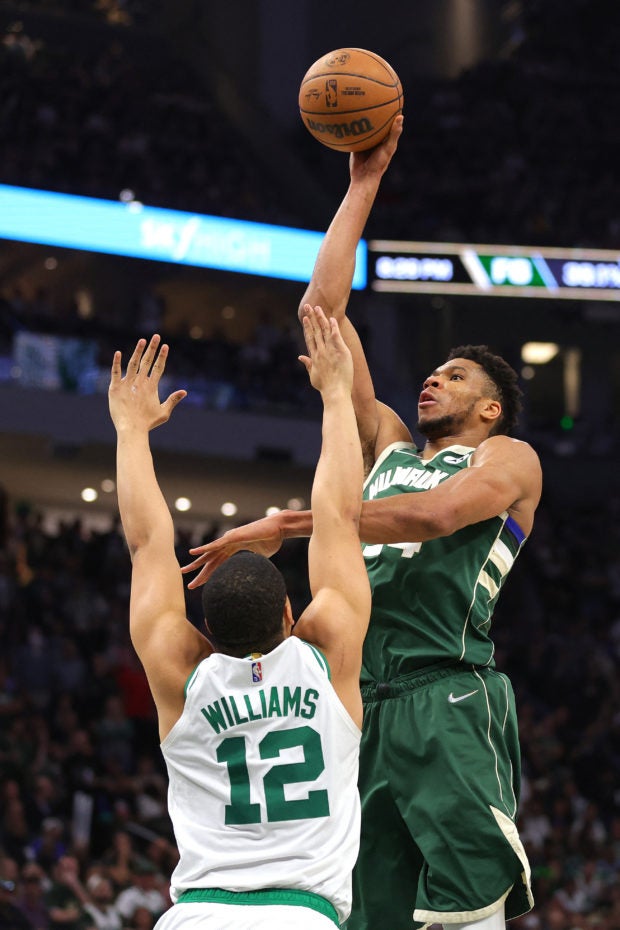 Giannis Antetokounmpo of the Milwaukee Bucks shoots the ball against Grant Williams of the Boston Celtics during the third quarter in Game Six of the 2022 NBA Playoffs Eastern Conference Semifinals at Fiserv Forum on May 13, 2022 in Milwaukee, Wisconsin.  (Getty Images via AFP)

But Tatum and the rest of the Celtics wouldn’t let that happen.

“I think we played with a little more toughness this game,” Tatum said. “Our season was on the line. I knew that and we knew that. We had to give it all we’ve got.”

Jrue Holiday scored 17 for Milwaukee, who remain without three-time All-Star forward Khris Middleton, who has missed nine games with a sprained left knee.