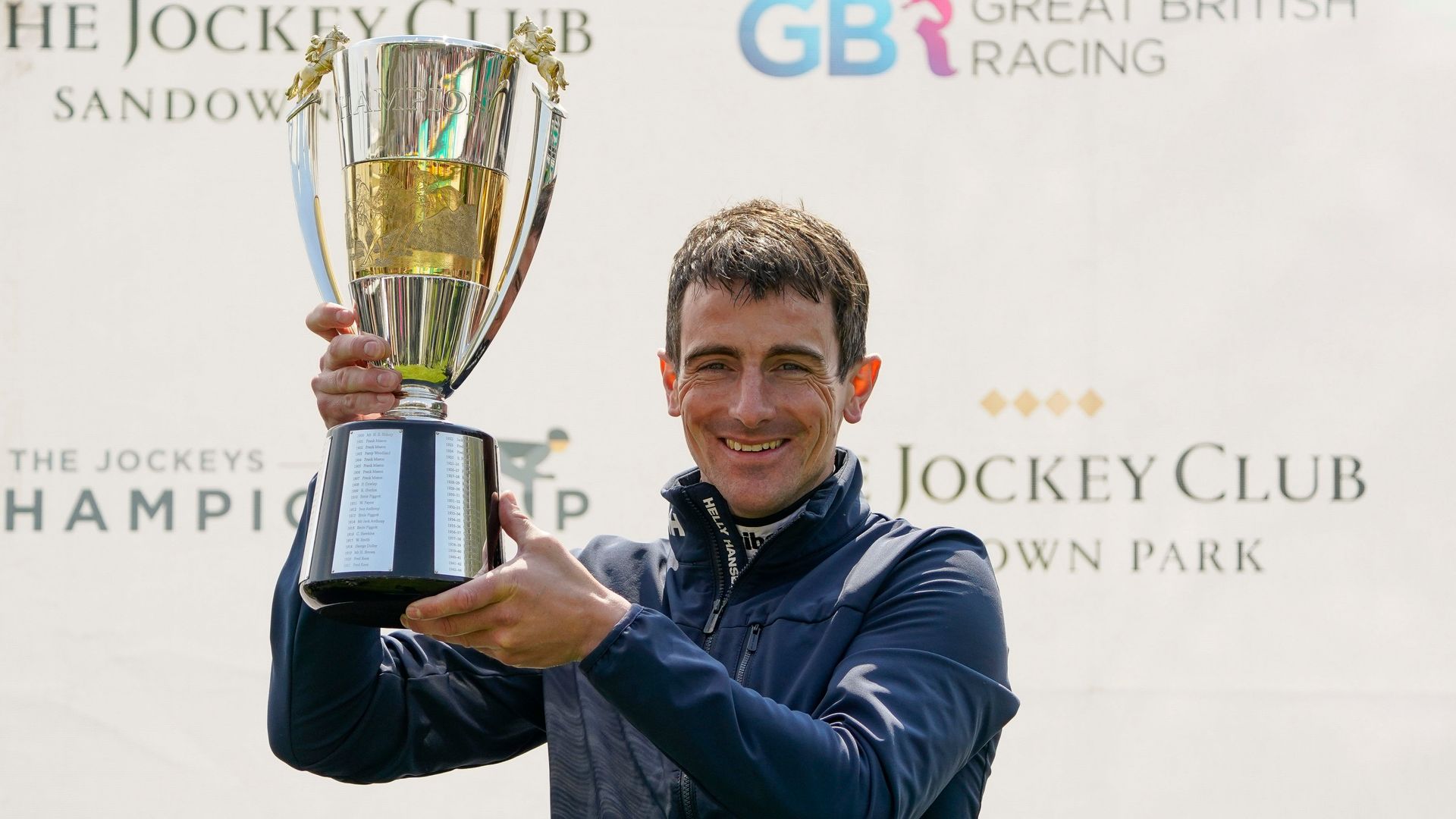 Brian Hughes feels becoming champion jockey for a second time this season is a bigger achievement than riding 200 winners.

Hughes was able to take the acclaim of his peers as he was presented with his trophy at Sandown on Saturday, but crucially members of his family were also on hand after being denied the opportunity due to the pandemic when he won the crown for the first time two years ago.

“To ride that number of winners in one season doesn’t really seem real, but I’ve had a good bit of luck along the way. It’s been hard work, but essentially you are doing a job which is your hobby,” said Hughes.

“I almost said I’d ride for free the other day, but in this day and age you don’t do anything for free! The programme is so relentless though, you couldn’t do it if you didn’t love it. We all go into it for the love of it, not for financial gain.

“Last year I felt I’d failed as I led all year and got beat by Harry (Skelton). It’s no different to a football team getting beaten in the FA Cup final, I was gutted.

“I got my head down and didn’t want it to happen again, so I worked as hard as I could to make sure it didn’t happen again.

“I think this year means more than the first as the last one ended early because of Covid and there were a lot more things going on in the world. Having lost the championship last year, to win it back, by a considerable margin and with 200 winners, it will mean the most.

“A few people said I’d only won it because the season stopped early, so I was eager to prove them wrong.

The life of a jockey means Hughes will barely get chance to celebrate, but he is sure his family will enjoy the day.

“I’ve got a week off and we’re going away for three days, and then I’m sure when the entries come out for Hexham I’ll be looking as I can’t help it,” he said.

“I don’t know if Sandown knows what has hit it as I’ve a team from Northern Ireland over and a team from Yorkshire. I’m one of the quiet ones in my family!

“I’ve five sisters, my elder sister Karen from Canada and the next, Elaine, literally runs my life along with my wife, Luci. She’s my accountant. Kathleen, Jennifer and Stephanie, the youngest, are the others.

“I’ve had to sacrifice a lot to get to this position, I’ve missed my sisters’ weddings but they sucked that up and accepted it, so this is a bit of payback.

“My ambition is to be champion jockey again, it’s all I ever wanted to be.”

While it was just a second title for Hughes, Paul Nicholls was crowned leading trainer for a 13th time.

“It’s been tougher (to win the big races) this year but every year is tough. In recent years I’ve either been neck and neck with Willie (Mullins) or Nicky, but this year it’s a bit more relaxed and I can enjoy the day,” said Nicholls.

“Around Christmas time the horses went off the boil, and I think a few others had the same problem. I was never quite happy with them but what was going on, I’ve no idea. That made it harder. In January and February I was thinking it was going to be extremely hard to win it.

“I knew we were going to be quiet at Cheltenham but we had a good Aintree with some nice winners there and the horses are flying again now.

“I might have turned 60 recently, but there are absolutely no thoughts from me about retiring. I love what I’m doing and as long as I’m fit and healthy, I’ve no plans to cut back – I love it.”

Kevin Brogan is the champion conditional jockey after a breakthrough season saw him partner 47 winners and he received his trophy from Grand National hero Sam Waley-Cohen.

He said: “It’s fantastic, I never thought I’d be champion conditional and I’m having to pinch myself a little bit.

“I used to pop in to Ted’s (Walsh) who was my local trainer and he was very good to me. I then went on to Robbie McNamara and Gordon (Elliott) where it was just a big learning curve.

“I’m at Jonjo’s (O’Neill) now and every day is a school day, you never stop learning. I saw an ad on Facebook that they wanted a conditional jockey. I thought I’d have no chance when I applied but I got a phone call the next day.”

JP McManus is Britain’s leading owner for the 15th time.