Voice actors in the anime industry are versatile and hold a strong position in the entertainment industry. Anime promotions have live events where they do live readings and interact with their fans. Anime voice actors, referred to as seiyuu (声優), have fan bases almost as large as the anime they work in. It is always fun to see the difference between their personalities and the personality of the characters they play. A lot of characters share the same voice actors. Their efforts need to be appreciated. They change their tone and the pitch of their voice to give us a perfect feeling of the characters that we read about.

Wanting to become a voice actor is a common dream in Japan. However, it is just as difficult as any other dream to accomplish. Japan has various schools where talented voice actors are given a chance to become professionals. Such voice acting schools are not as common anywhere else as they are in Japan. Once the students graduate, they usually join an agency and proceed with their carrier. With the wide range of talented voice actors, anime roles are mostly cast through auditions, despite the popularity of the voice actors.

The amount of hard work that was put in each role is commendable. It is almost difficult to distinguish them from the characters they play. It might almost shock you at times when you find out that these characters are played by the same characters. Here are ten shocking pairs of characters from different anime that share the same voice cast! 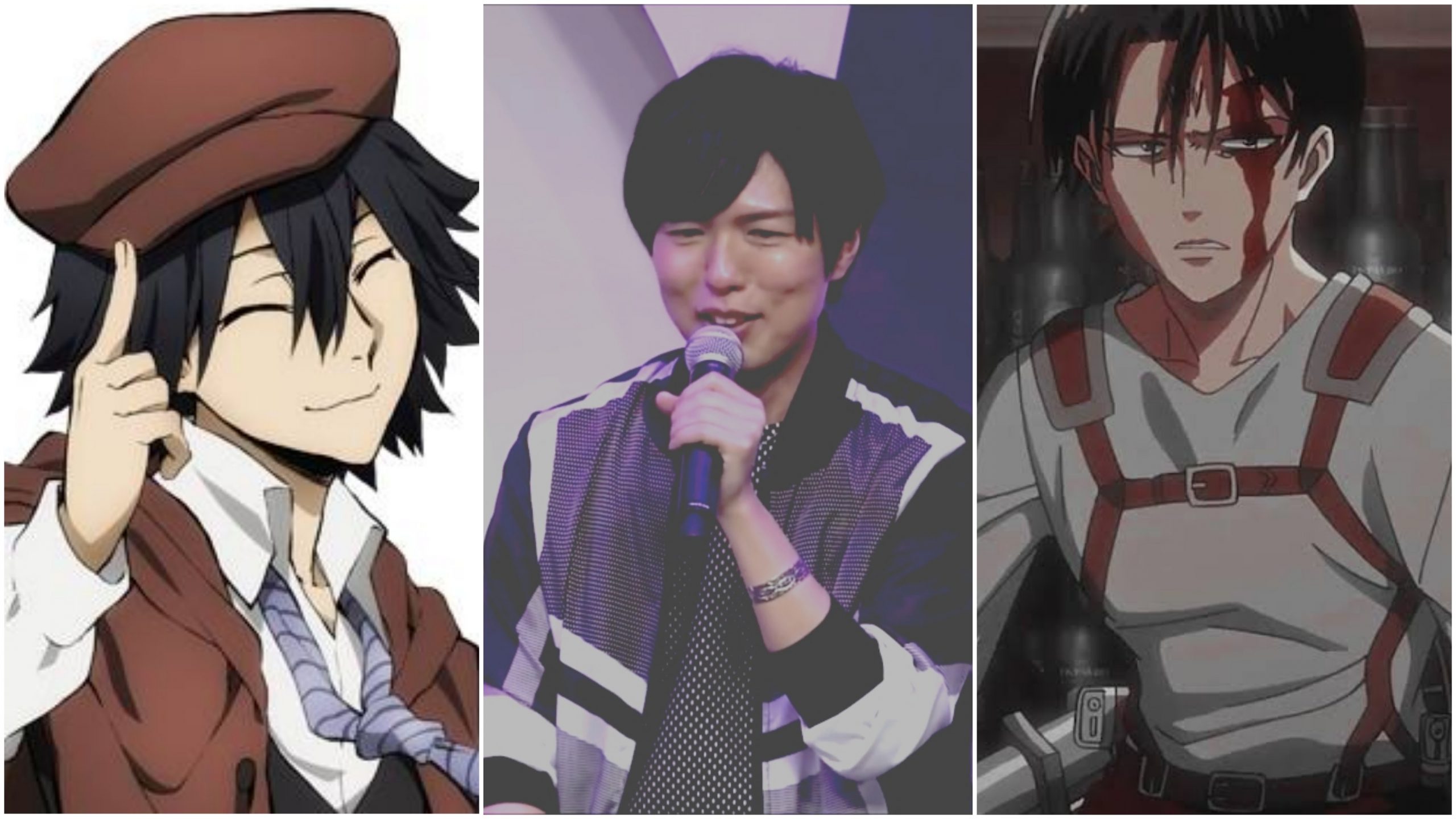 The cheeky detective from Bungou Stray Dogs and the skillful squad captain of the Survey Corps from Shingeki No Kyojin (Attack on Titan) share the same voice actor. Kamiya Hiroshi, the voice actor of these characters, is well known for many other characters. He is extremely talented and experienced. While Levi sounds as sharp as the character demands, at the same time, Rampo is the exact opposite. He is childish and has an obsession with snacks. It is amazing how these two polar opposite personalities were carried out perfectly by Kamiya Hiroshi with so much grace.

What’s even more incredible about these characters is that they are both insanely popular and have a really strong fanbase. If you haven’t watched either of the two anime mentioned, then you can also recognize Kamiya Hiroshi from the voice of other characters such as Saiki Kusuo from The Disastrous Life of Saiki K, Takeda Sensei from Haikyu, Akashi Seijurou from Kuroko no Basuke, Izaya Orihara from Durarara, Yato from Noragami or Law Trafalgar from One Piece. 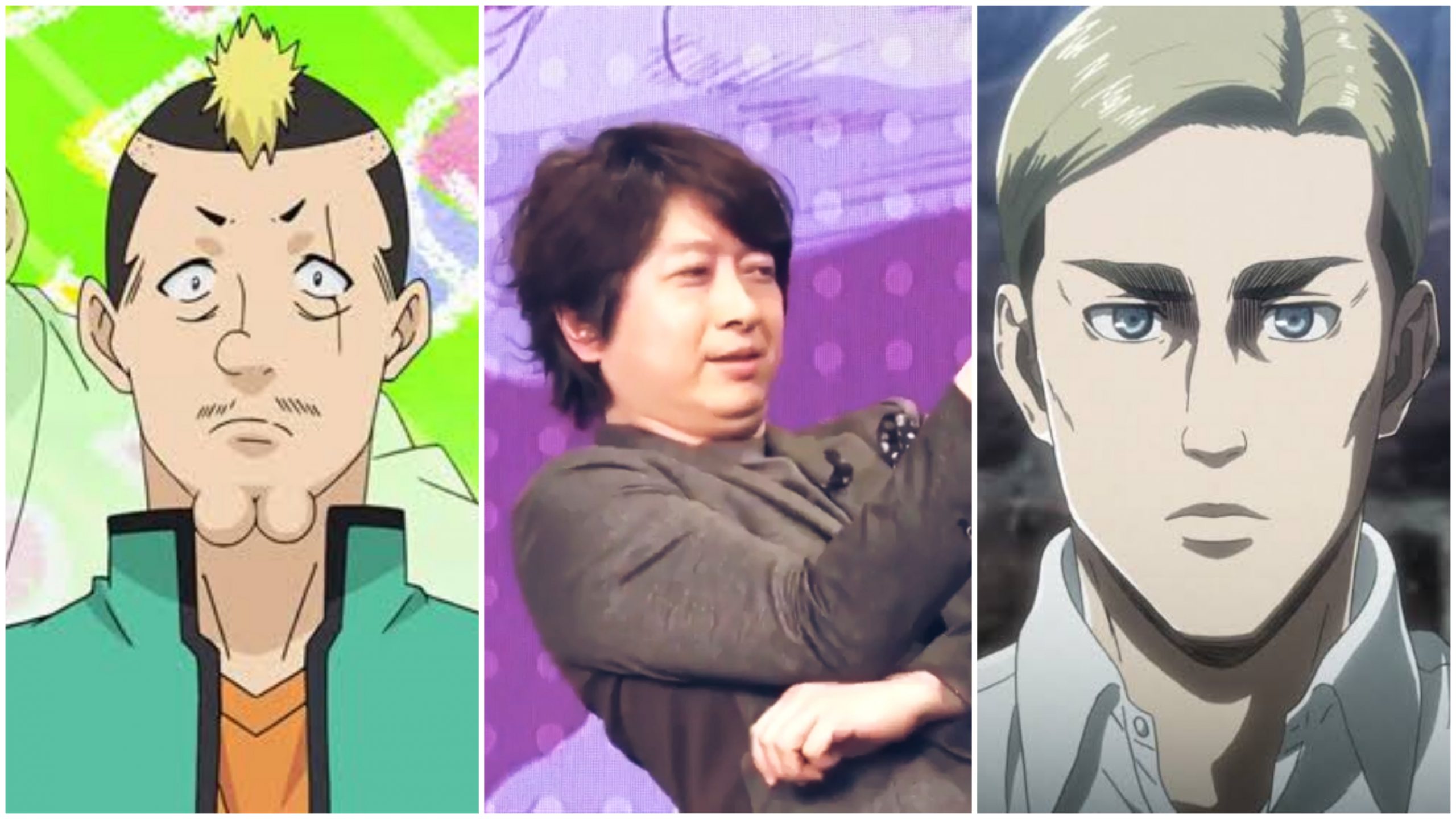 This one absolutely blows my mind. Nendo Riki from the Saiki Kusuo series is known for being a complete idiot. His idiocy is exaggerated to a point where Saiki cannot read his mind because it’s just empty. On the other hand, we have Erwin Smith, the genius commander of the Survey Corps. He was known widely for his extreme knowledge and precisely thought-out plans.

It is mind-boggling to realize that these characters share the same voice actor, Daisuke Ono. The award-winning actor has done so many versatile characters in his experience that it is impossible not to acknowledge him for his amazing streak of well-done characters.

It is even more shocking to realize that the Duo from Shingeki No Kyojin, Levi and Erwin, and the duo from the Saiki Kusuo anime, Nendo and Saiki, are in fact brought to life by Kamiya Hiroshi and Daisuke Ono. They are extremely good friends off stage too and host the ‘Dear Girl Stories’ radio show together.

Other characters voiced by Ono Daisuke are Sebastian Michaelis in Black Butler, Handa Sei in Barakamon, Joutaro Kujou in Jojo’s Bizarre Adventure, Midoriya Shintarou in Kuroko no Basuke, Sindbad in Magi: The Labyrinth of Magic. 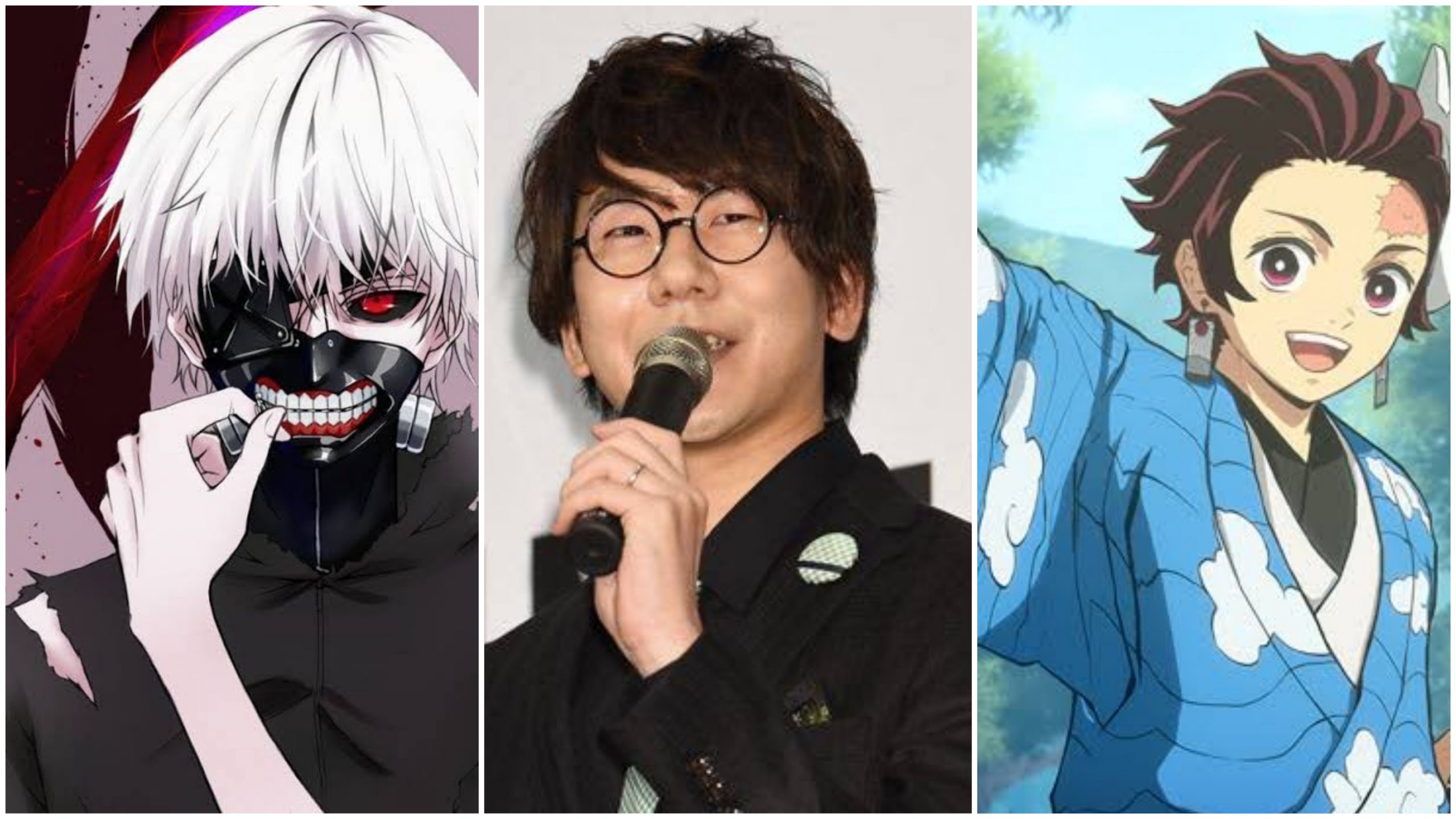 Kaneki Ken, the famous finger-cracking ghoul who was widely feared, shares the same voice actor with Tanjirou Kamado, the protagonist of the record-breaking anime and manga, Kimetsu no Yaiba. Yes, Hanae Natsuki unveiled an antagonistic protagonist who everyone feared and another character who was the epitome of kindness.

Other popular and versatile roles of Natchan include Hoshiumi Korai from Haikyu, Shiki Tademaru from Kemono Jihen, Toretsuka from the Saiki Kusuo series, genius piano player Arima Kousei from Shigatsu wa Kimi no Uso, Maedomari from Charlotte, Falco Grice from Shingeki No Kyojin. 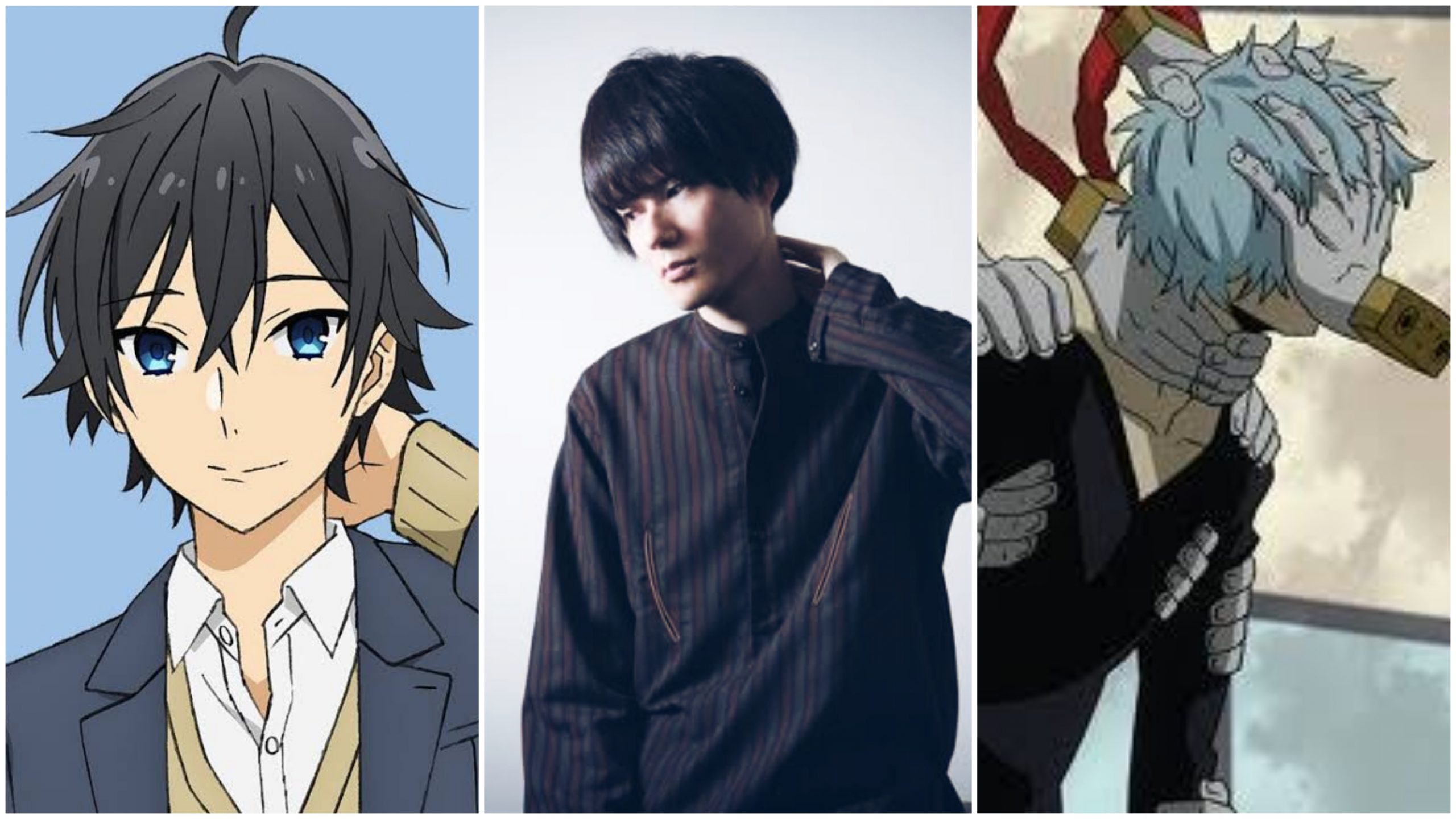 Uchimura Kouki, who voices Miyamura Izumi in Horimiya, also voices Shigaraki Tomura in My Hero Academia. Horimiya is an ongoing anime series based on the manga by the same name. The romantic and shy character has the same voice actor as the ruthless villain from the My Hero Academia series. He has a soft voice, but he uses it for many tsundere characters efficiently. His voice makes it difficult to dislike the characters he plays.

Uchiyama Kouki has a shy personality and has often expressed how he is quite reserved when meeting new people. However, everyone in the industry loves Uchiyama Kouki for his fun retorts. In many Seiyu-events, he turns the fun on a notch higher with his out-of-the-box answers. Other voice actors like Okamoto Nobuhiko and Kimura Ryohei have many ‘Cute Uchi Stories’ that they narrate from time to time. He also has an absolute love for rabbits, he says. 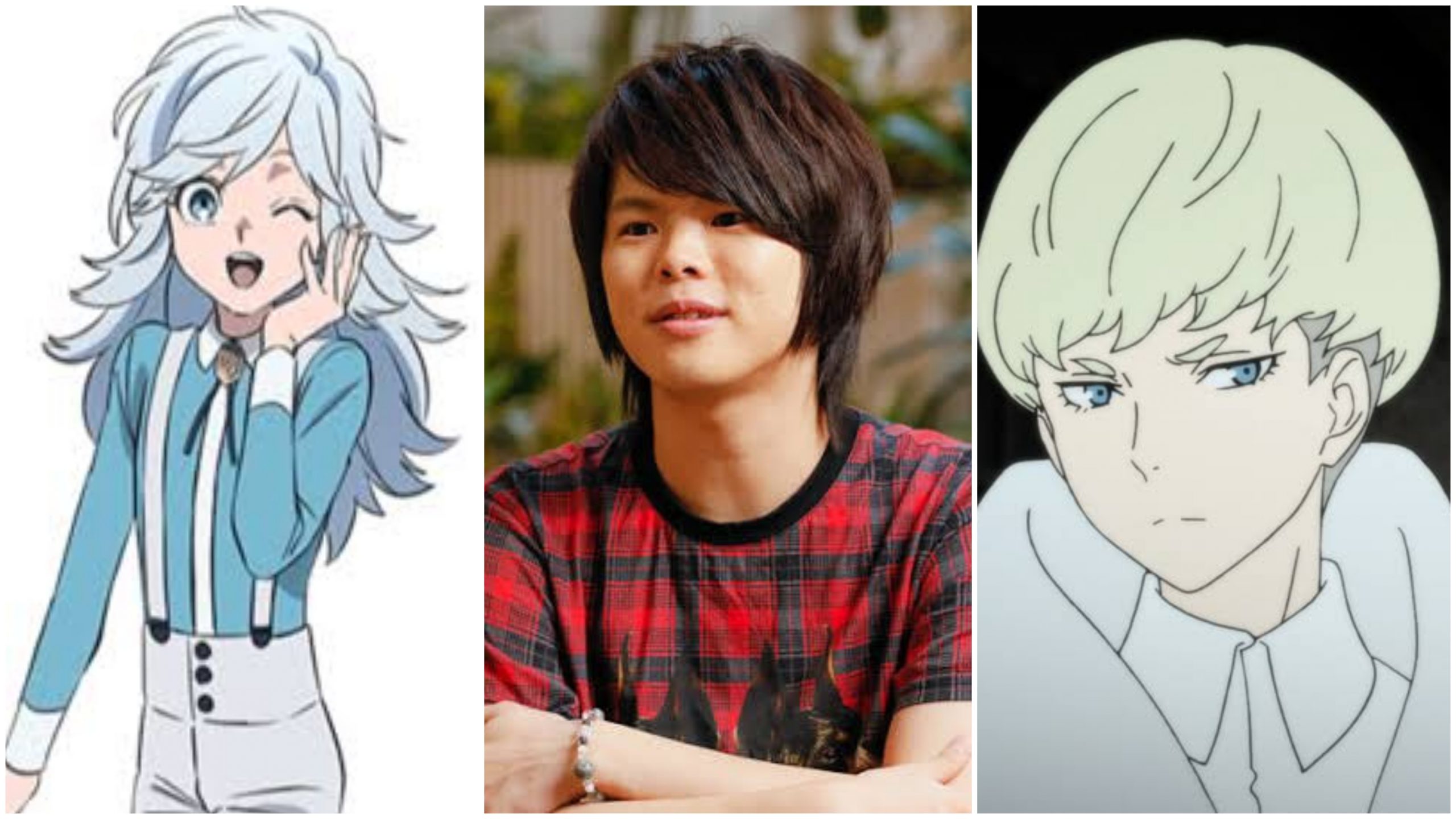 Ayumu Murase is a very famous voice actor from Japan who voiced Akira from Kemono Jihen and also Ryo from Devilman: Crybaby. Kemono Jihen is an ongoing anime that you can stream on Netflix. If you haven’t started watching this anime, here is what you need to know about Akira. Akira is a boy who has a lot of feminine features and is often mistaken him a girl. For Ayumu Murase, this was not so difficult due to the wide range of pitch in his voice. Contrary to Akira, Ayumu Murase voices Ryo, the satan from the Devilman: Crybaby anime. Very unlike Akira, Ryo has a strong and calm voice. He is seen as extremely reliable and smart throughout the series.

Ayumu Murase had a long-running joke where he would cutely say ‘Joshi Janaii,’ meaning ‘I am not a girl’ after someone complimented saying that he is cute as a girl. He is a very open-minded person who often has the thrill to try new things. Even his juniors, such as Ishikawa Kaito, often comment on his free-spirited nature that makes him very easy to approach even if he is a senior.

His natural voice is husky, but he often goes high pitched when he creates his alternate personality, ‘Ayumi-Chan.’ A lot of voice actors find his feminine voice very cute and often tell him to enact it. Other famous roles by Ayumu Murase are Hinata Shouyo from Haikyu, Gaia from Baki, Luck Voltia from Black Clover, Ginrou from Dr. Stone, Hugh from Servamp, Asuto Inamori from Inazuma Eleven, Karura from Ao no Exorcist. 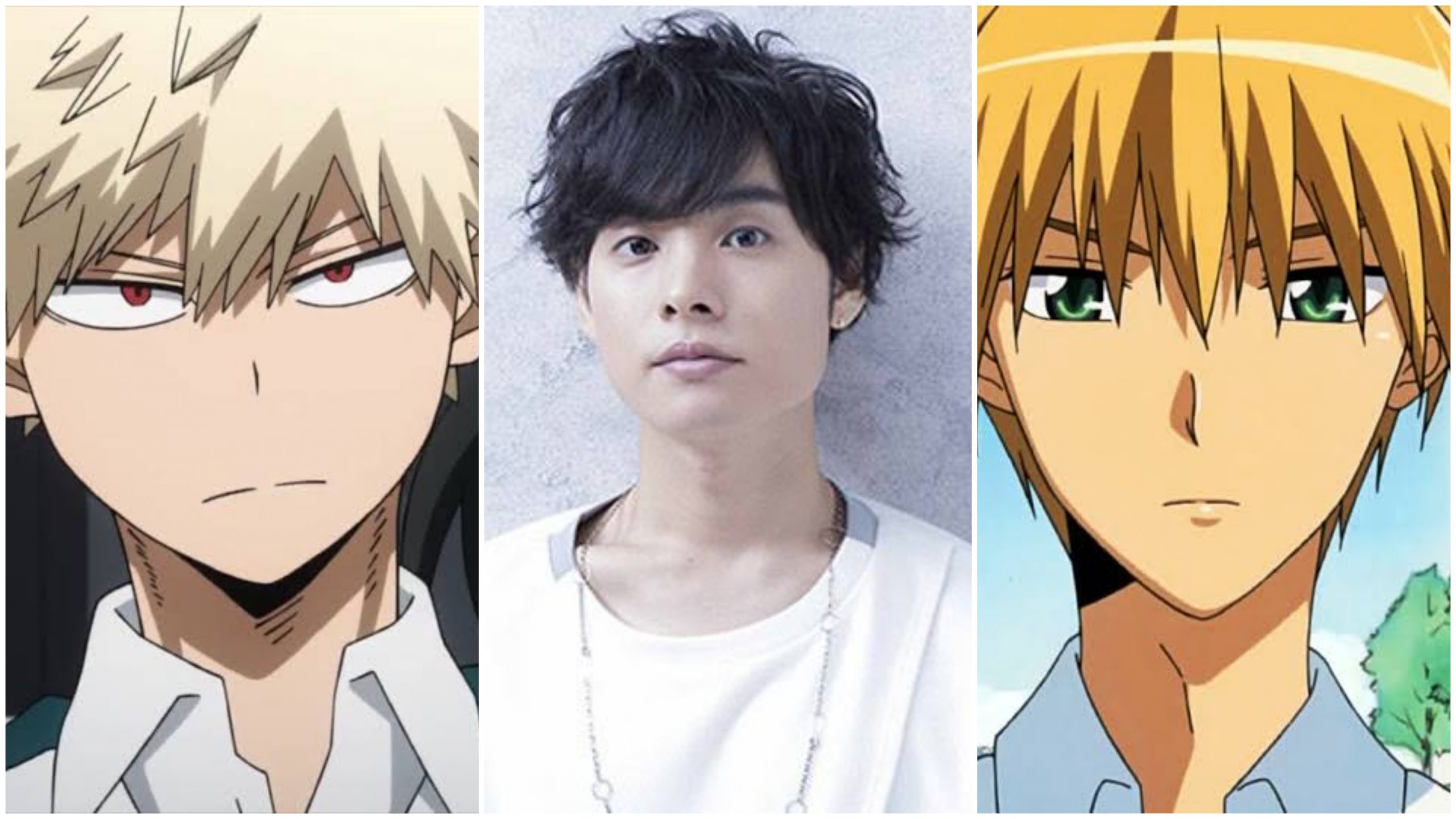 Bakugo and Usui are nowhere even close to alike. Usui was the prince of his high school. Bakugo is basically a bully. However, the two similarities that they have are blond hair and Nobuhiko Okamoto. He is affiliated with the Pro-fit agency. Voice actor Okamoto is a fun-loving person who has a very soft-spoken manner. He is often pulling his colleagues’ legs. He is a strict senior yet lovable. A lot of younger voice actors look up to him and are often scared of him when they are too chaotic. He worked multiple part-time jobs to earn money for his voice acting class.

Nobuhiko Okamoto has a deep obsession with sweets. His  Instagram page is filled with pictures of chocolates and pastries. His addiction to sweets is so severe that his agency had to limit his chocolate consumption to only one chocolate a day. Nobuhiko Okamoto is also an extremely good patisserie. On valentine’s day, he released his own set of chocolates.

Like Bakugo and Usui, Okamoto Nobuhiko has voiced many other characters like Rin Okumura from Ao no Exorcist, Eiji Nazuma from Bakuman, Kai from Beastars, Narunosuke from Bleach, Mikoshiba Mikoto from Gekkan Shoujo Nozaki-Kun. 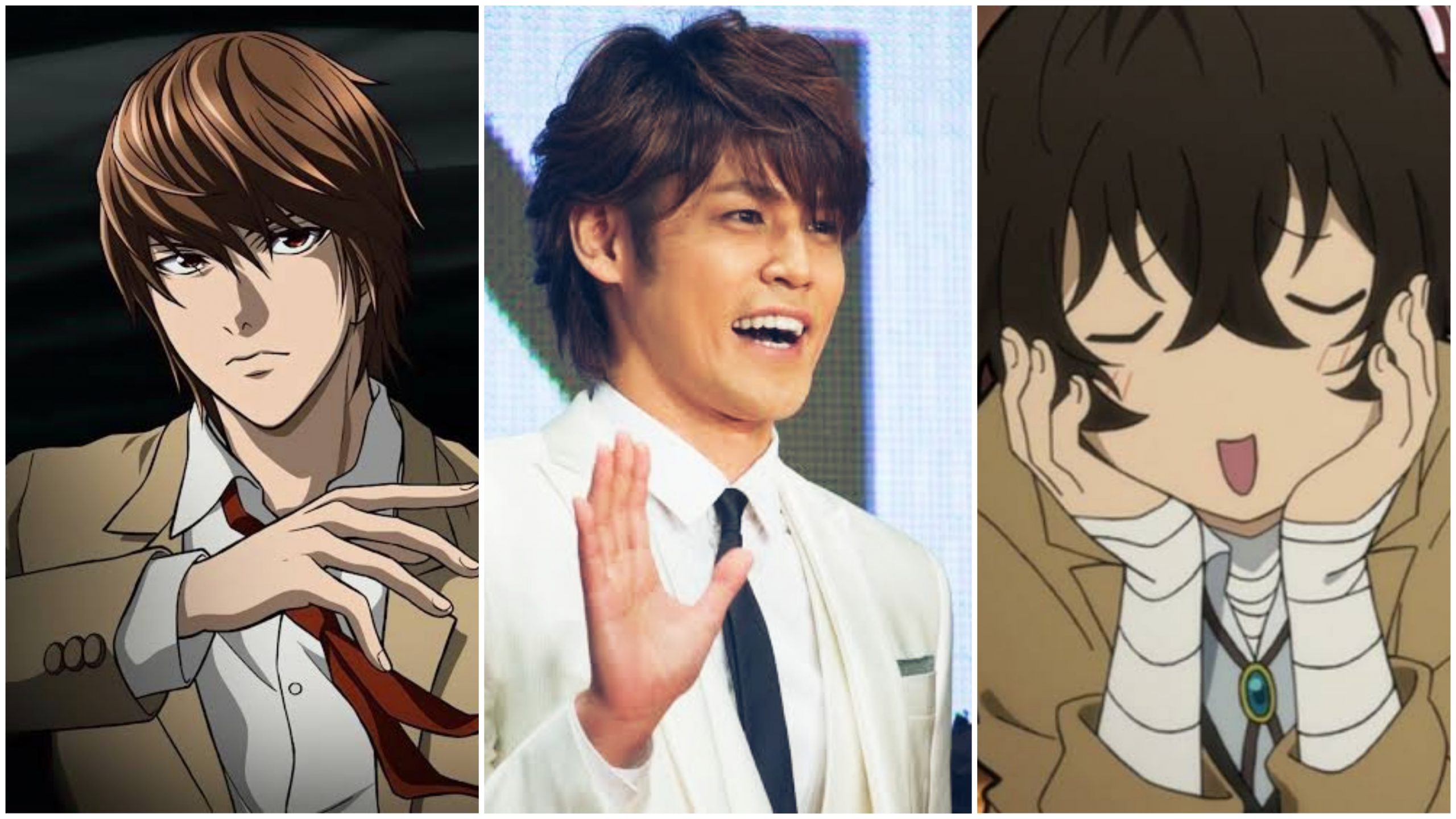 If none of the other characters surprised you, this probably will. Both the characters are insanely famous and widely simple. Whether it’s a psychotic genius student with a God complex or a genius detective with a suicidal tendency, Mamoru Miyano can voice anyone with perfection.

Mamoru Miyano is an award-winning voice actor. He is also a singer and has a tremendous influence. Miyano Mamoru has played leading roles in many anime such as Free (Rin Matsuoka), Durarara (Kida Masuomi), New Initial Legend D Movie (Takumi Fujiwara). He also voices Shuu Tsukiyama, commonly called the Gourmet.

Mamoru Miyano is a cheerful person. He is on good terms with many voice actors but is especially close with Hosoya Yoshimasa. A lot of other voice actors enjoy imitating his voice. On stage, he is quite confident and cheers the crowd with his comedic acts. 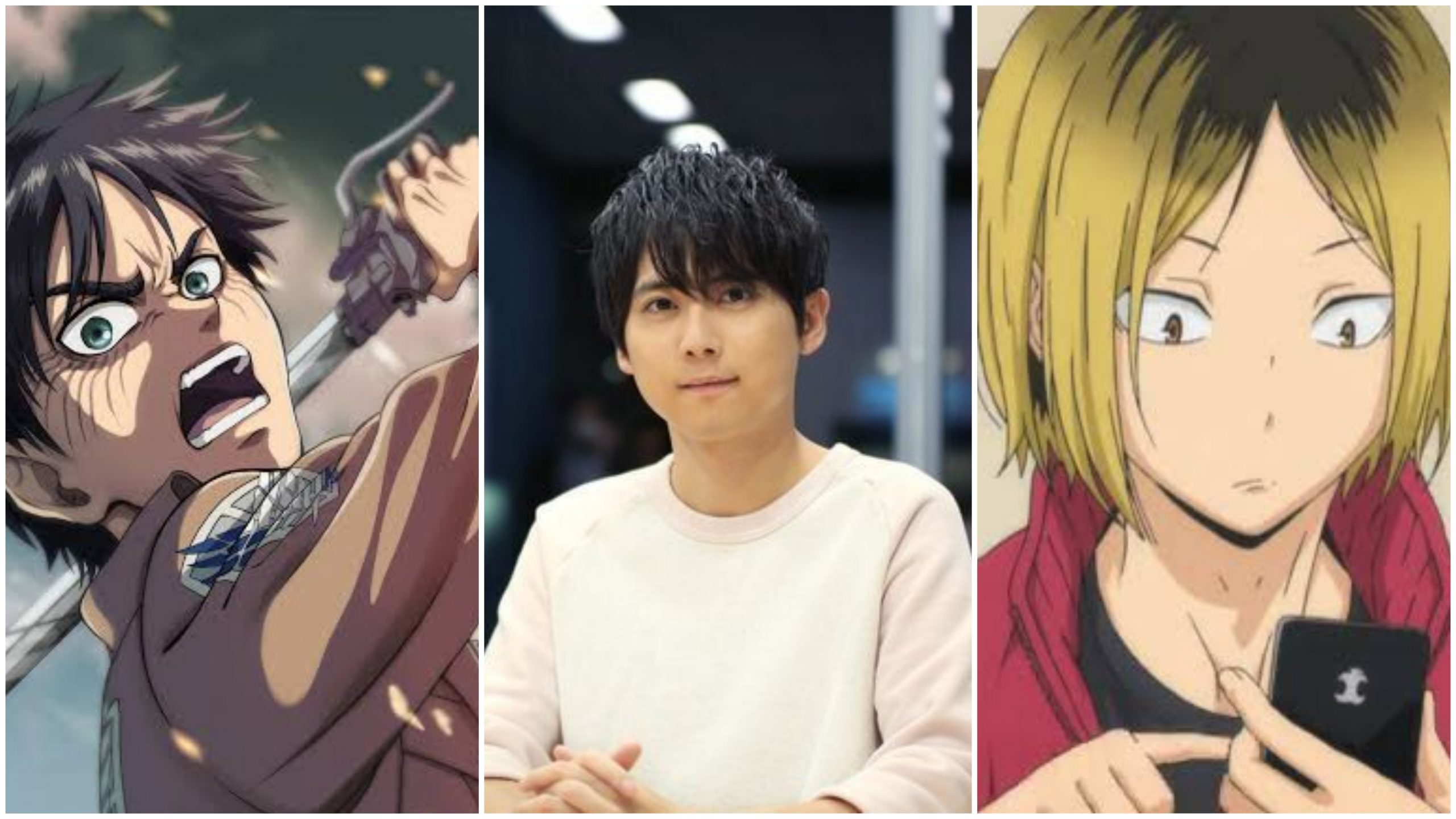 Hearing the Haikyu character for the first time, I could have never guessed that he was voiced by Kaji Yuki, who also voices Eren Jeager in the popular shounen anime series, Shingeki No Kyojin. Kenma hardly had any loud lines until Season 4 of Haikyu. Eren Jaeger, on the other hand, had been pretty much screaming since episode 1. Kaji Yuki’s phenomenal performance in both the anime gave us our favorite characters as we know them today.

Kaji Yuki is famous for his roles as Alibaba in Magi– The Labyrinth of Magic, Mabuchi Kou in Ao Hara Ride, Todoroki Shoto in My Hero Academia, Rentarou Satomi in Black Bullet, Kuro/Sloth in Servamp, Issei Hyoudou in High School DxD, Meliodas in Nanatsu no Tazai (Seven Deadly Sins) and Sabito in Kimetsu no Yaiba.

He is one of those voice actors who are often picked on because they are so widely loved. Even after being one of the highest-paid voice actors in the industry, Kaji Yuki is very down-to-earth. Before working as a voice actor, he worked as a bento seller. He has often mentioned how buying a bento has become quite a schedule for him because of his part-time job. Kaji Yuki has a very intimate friendship with Shimono Hiro. In one of Shimono Hiro’s drunk accounts, Kaji had to bathe him. Shimono Hiro often points out how dedicated, and hard-working Kaji Yuki is and treats everyone with care. 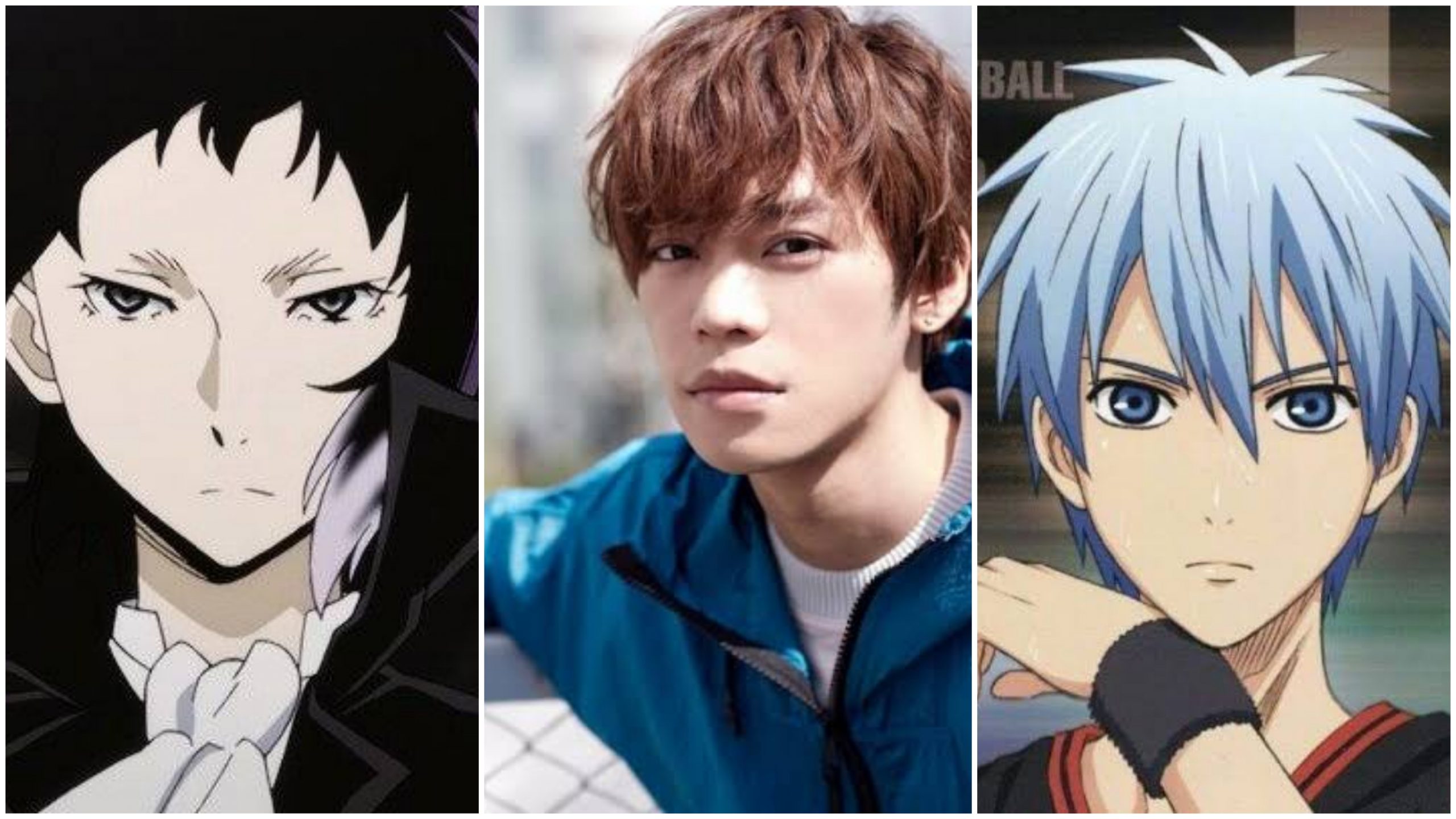 This is yet another odd pair who have the same voice. Ono Kensho did an amazing job at both, of course. Kuroko from Kuroko no Basuke is a fifteen-year-old student with a unique skill in Basketball. Ryuunosuke Akutagawa is the antagonist of Bungou Stray Dogs who is often controlling an urge to kill the protagonist, Atsushi. The difference in the pitch of their voice makes it hard to believe that they are voiced by the same voice actor.

Ono Kensho debuted with dubbing Harry Potter in the Japanese dubbed version of the Harry Potter series. In 2019 he married fellow voice actress Hanazawa Kana after dating her for a long time. Ono Kensho, Eguchi Takuya, and Hanae Natsuki are very close friends and often have many drunk encounters. In Nathan’s YouTube channel, they play a series of card games like Uno, Nanja Monja, and many more. The trio is chaotic and hysterical together. 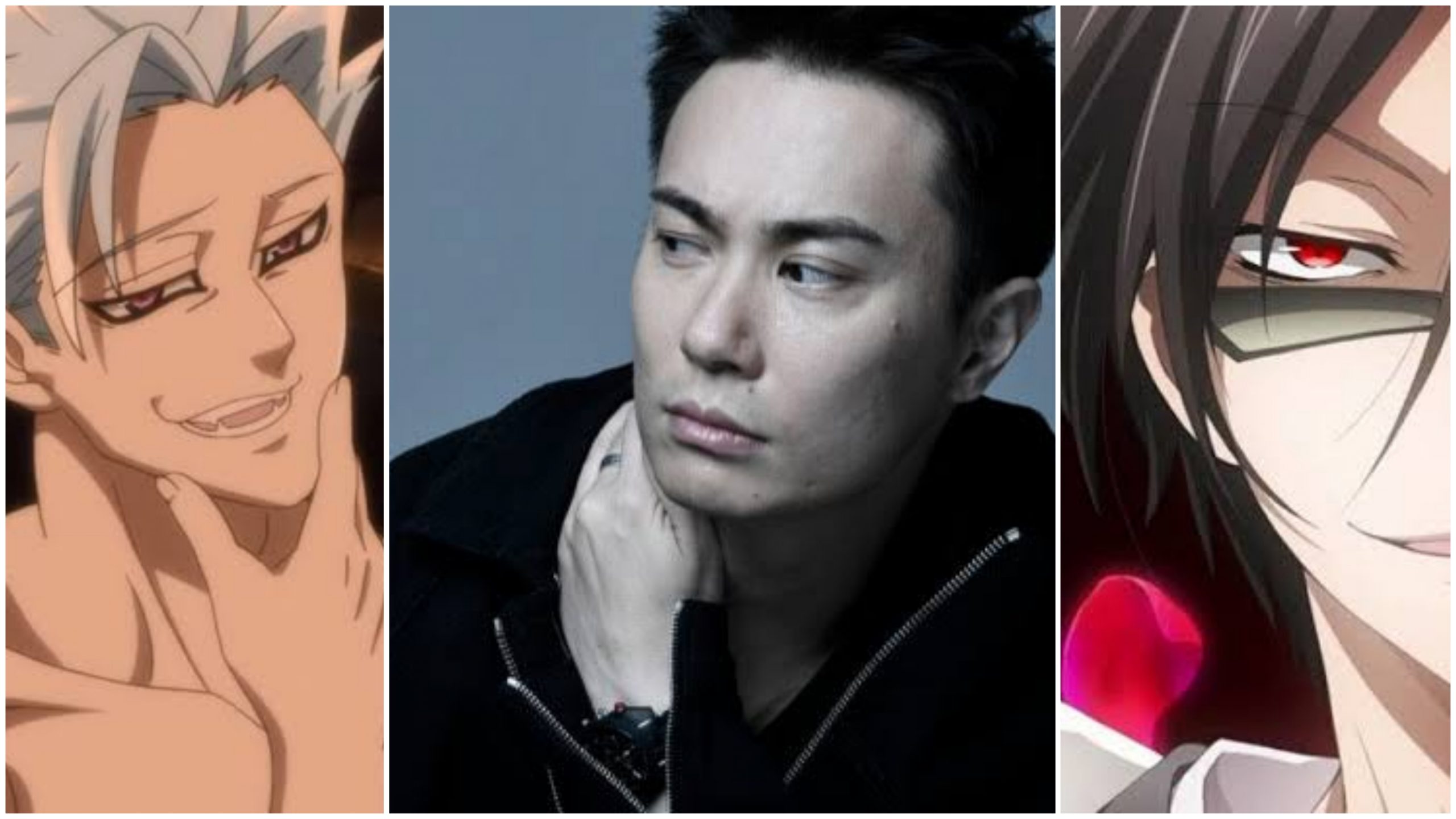 This is yet another polar opposite pair of characters voiced by Tatsuhisa Suzuki. Ban, a strong character from Nanatsu no Tazai sharing his voice with the very psychotic villain of the Servamp anime, Tsubaki, was a big surprise. Both the anime mentioned features the seven deadly sins. Ban from Nanatsu no Tazai represents greed. In Servamp, Tsubaki represents melancholy, an eighth sin. Tatsuhisa Suzuki has delivered both these roles with absolute care and perfection.

Tatsuhisa is married to Japanese singer LiSA who also sang the opening of Kimetsu no Yaiba, Gurenge.

Selecting only ten voice actors from the large ocean of talent was not an easy task. However, in the list of pairs of characters who have the same voice characters, which one did you find absolutely shocking?